The bundling&bagging packing machine occupies less field of production line. Stretching film, bagging film, material pushing and stacking is all controlled by servo which is precise and stable. When change the length, the program will automatically and precisely calculate each position without manual input and calibration.

Maximum Line Speed: 18 m/min (According to four-pipe and four-station)

2. It is simple,quick and humanized to change the spec.

3. Easy to replace the stretch films and packing bags.

5. Stretch film bundling and bagging are completed at the same time, the mechanism is simple.

6. Stretching film, bagging film,material pushing and stacking is all controlled by servo which is precise and stable. When change the length, the program will automatically and precisely calculate each position without manual input and calibration.

7. The front stacker has the function of pipe inspection and storage.

8. The front stacker is open structure, and the pipes after cutting can be arranged automatically.

The equipment occupies a small area

3.The electric cabinet is arranged in the stacker, which does not occupy space, and is convenient for operation and maintenance.

Fast and easy to change spec 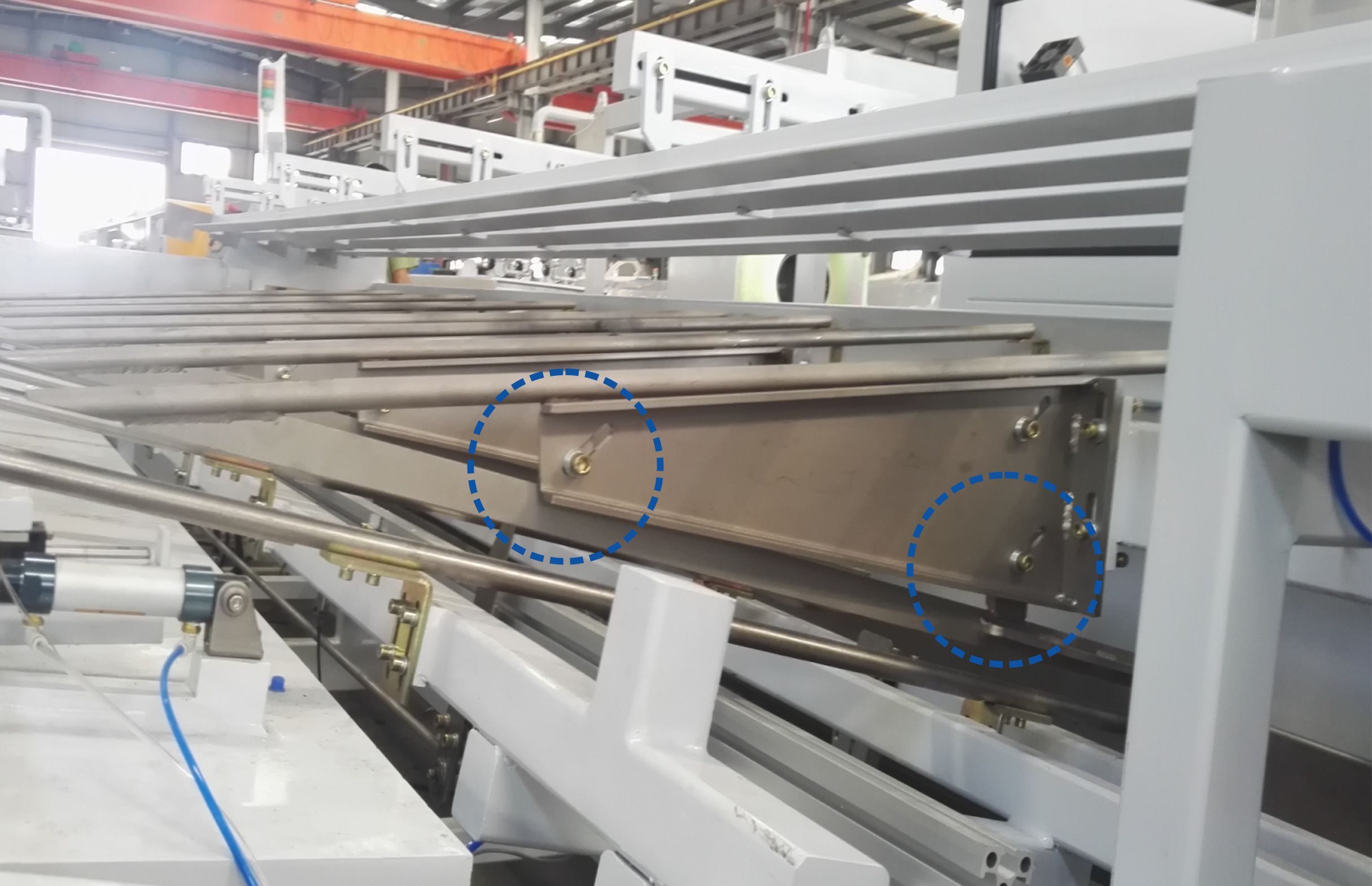 To change the diameter of the packed pipe, simply loosen the screw and move the discharging plate to the corresponding position.

Fast and easy to change the length spec 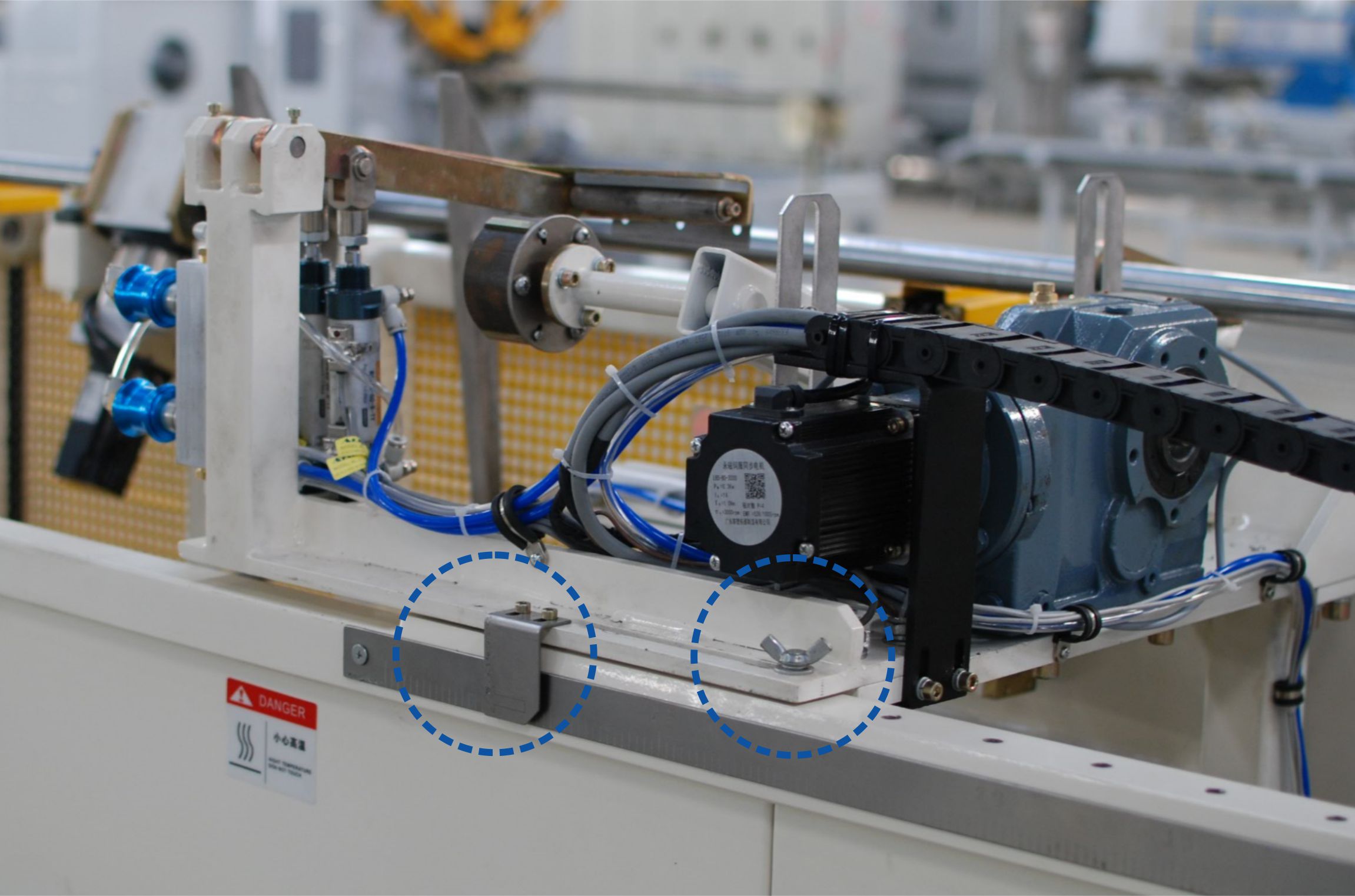 To change the length of the pipe, just loosen the butterfly screw, you can easily slide the whole device to the mark position of the scale, and set the corresponding length on the touch screen. 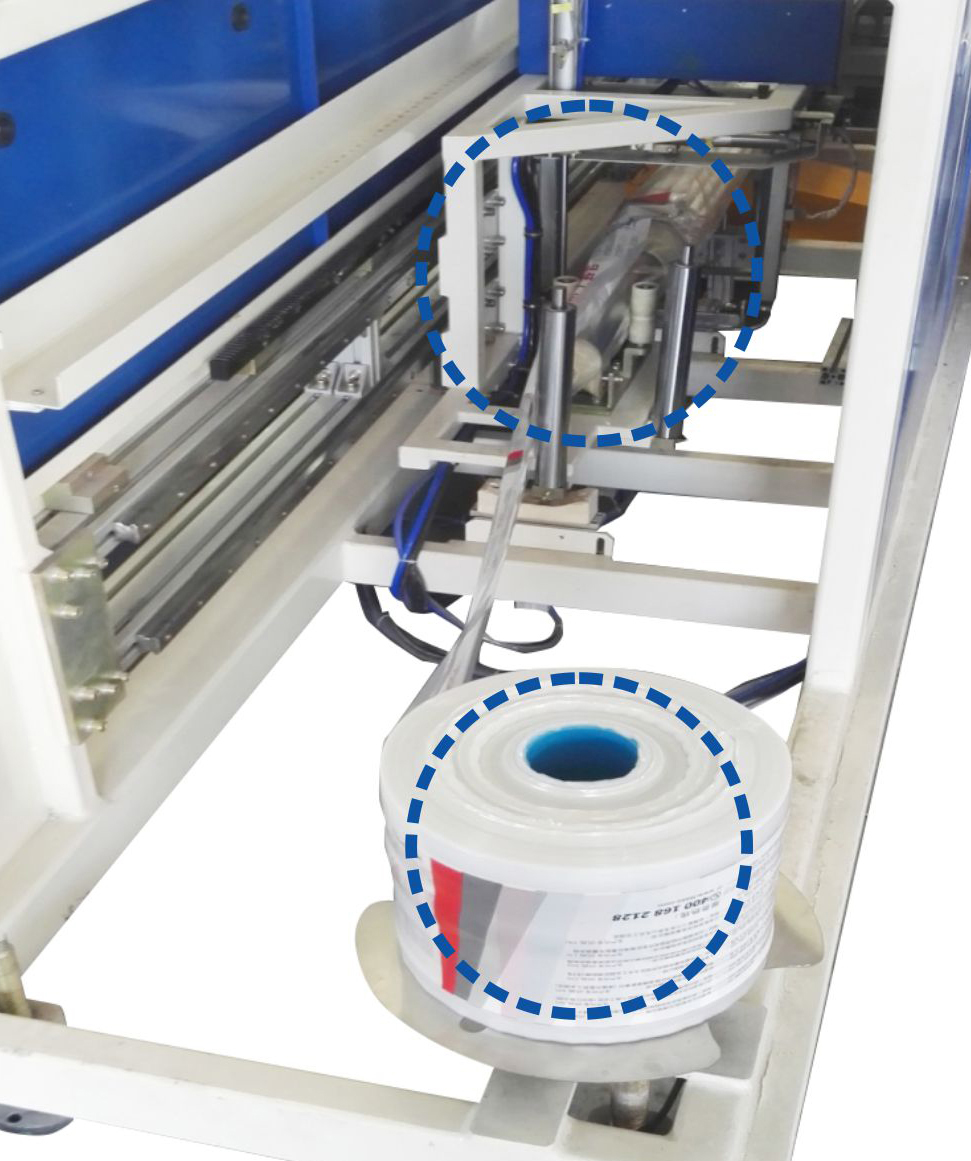 The bagging film is set at the tail end of the machine, open mechanism, large replacing space and the positioning core of the bag can be removed completely and easily when changing the bag, which is very convenient for the bag to penetrate. 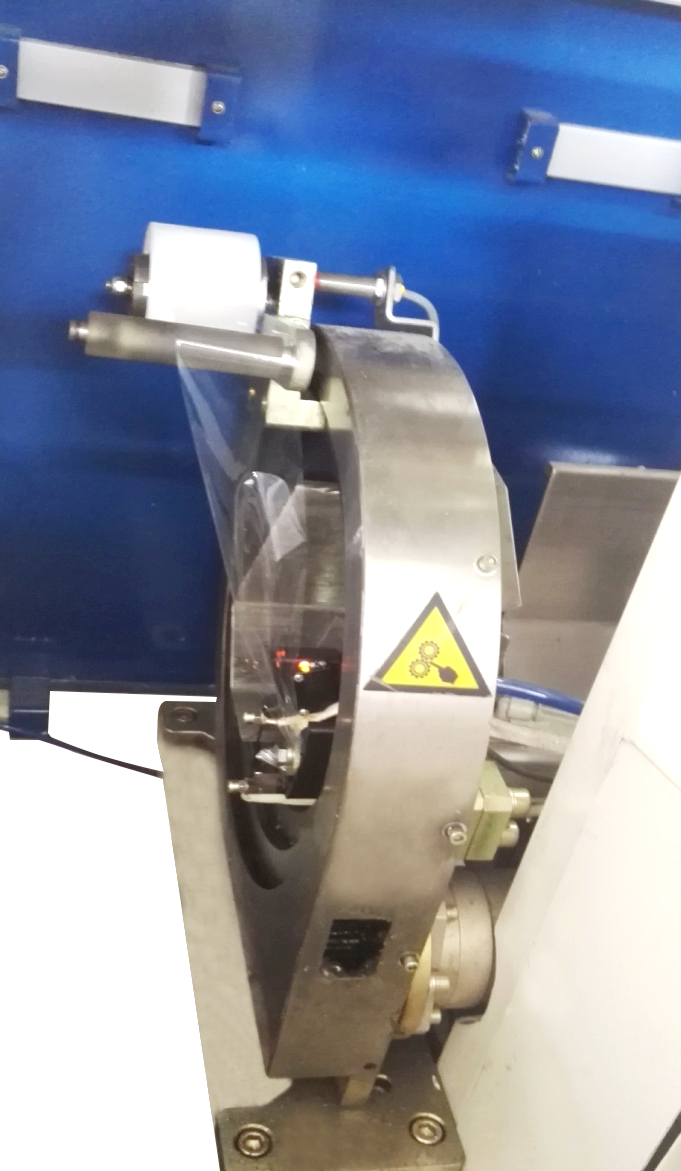 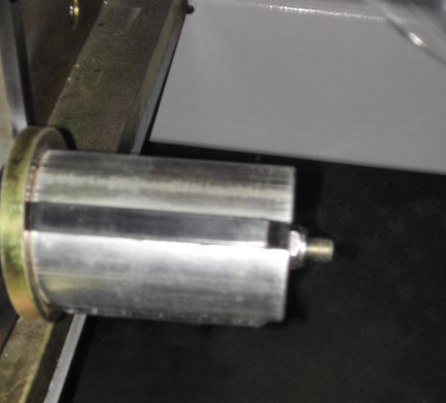 The stretch film can be replaced at the front and rear 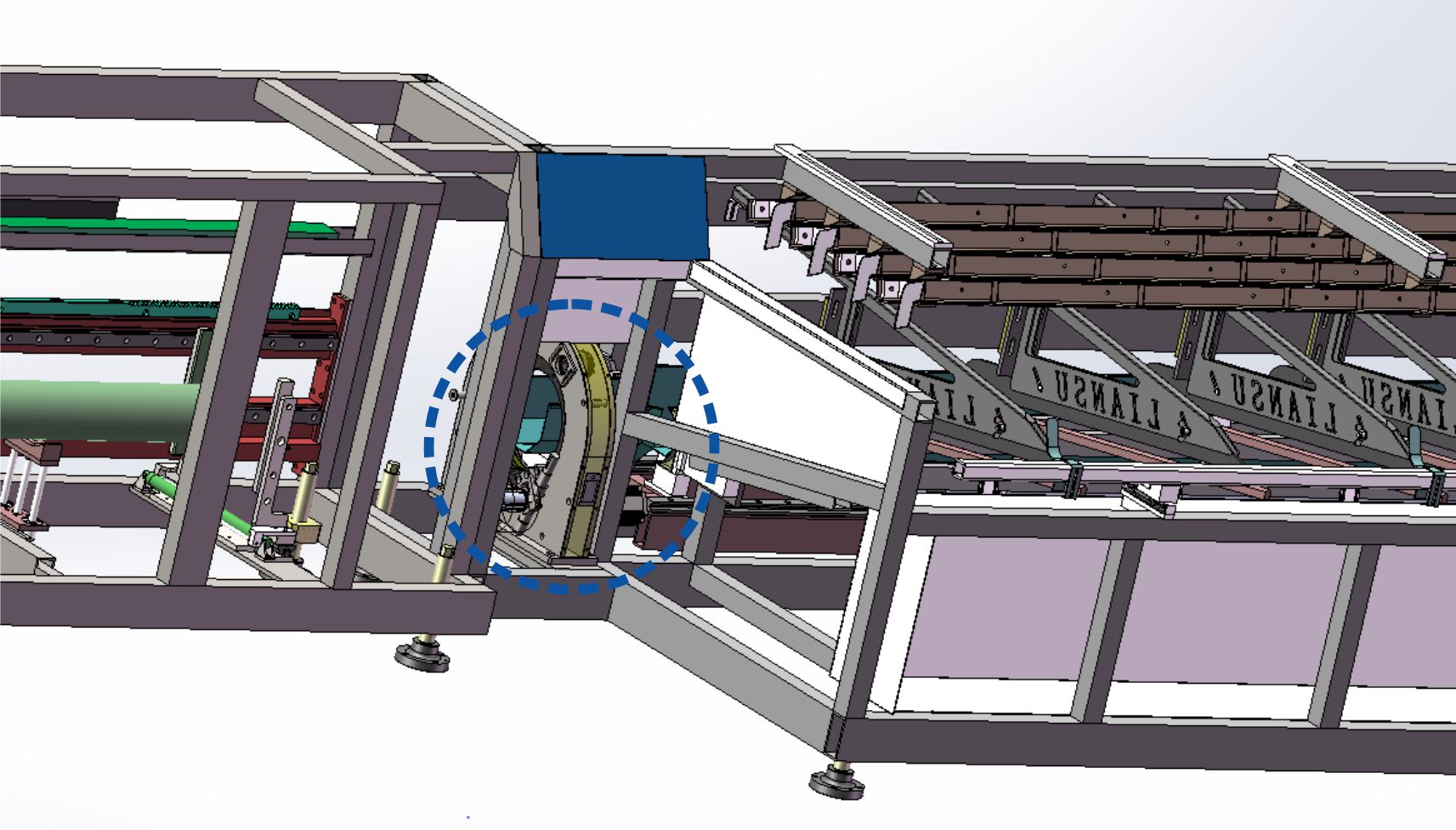 The front and back of the spiral head are all open areas, so it is easy to observe the bundling condition of the pipes in front and back for easily changing film. 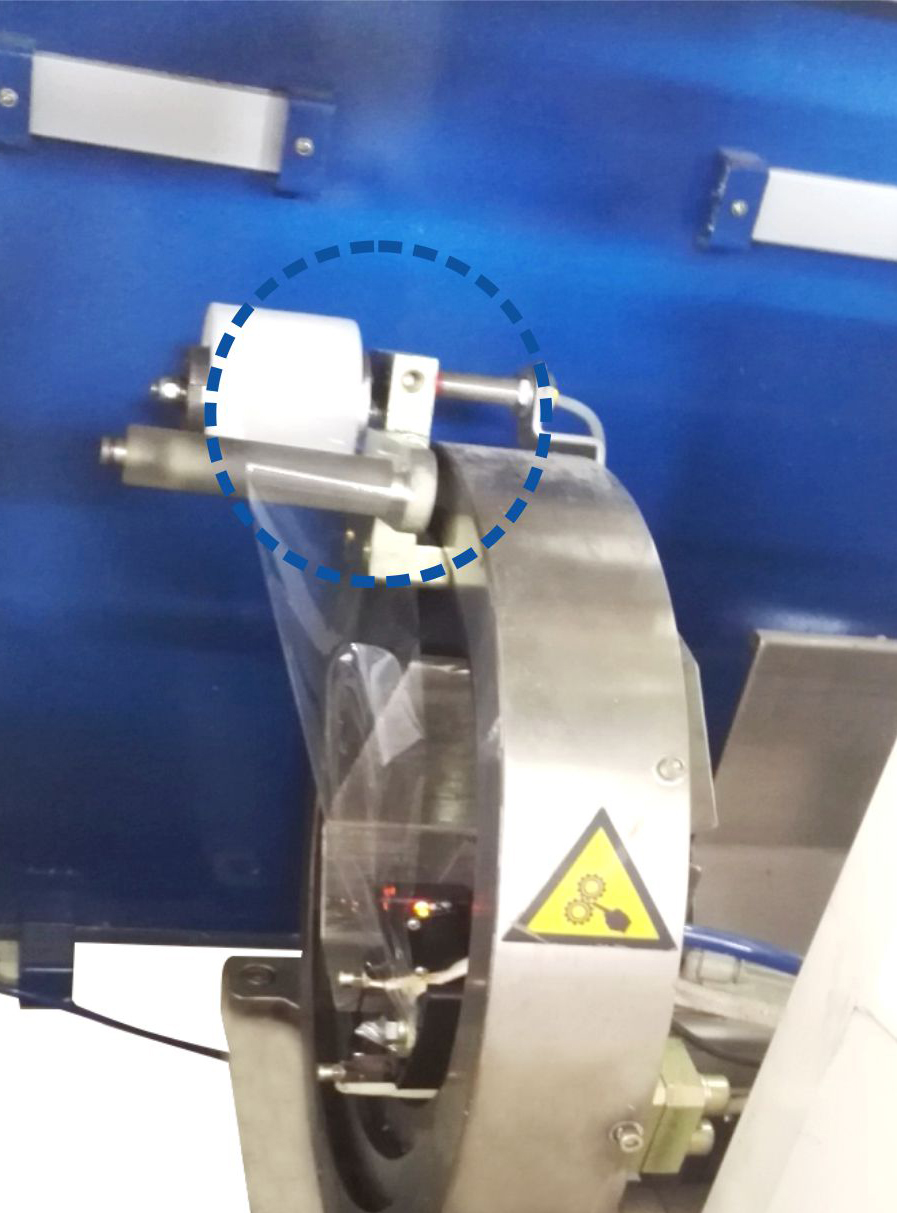 The film cutting wire and fixed seat of film drawing cylinder are 3D printed parts, which not only ensure the installation accuracy, but also ensure the strength of the parts.The infrared detection method is used to detect the existence of the film, the detection range is large, the detection is reliable, and the switch is set in a safe area, not easy to be damaged. 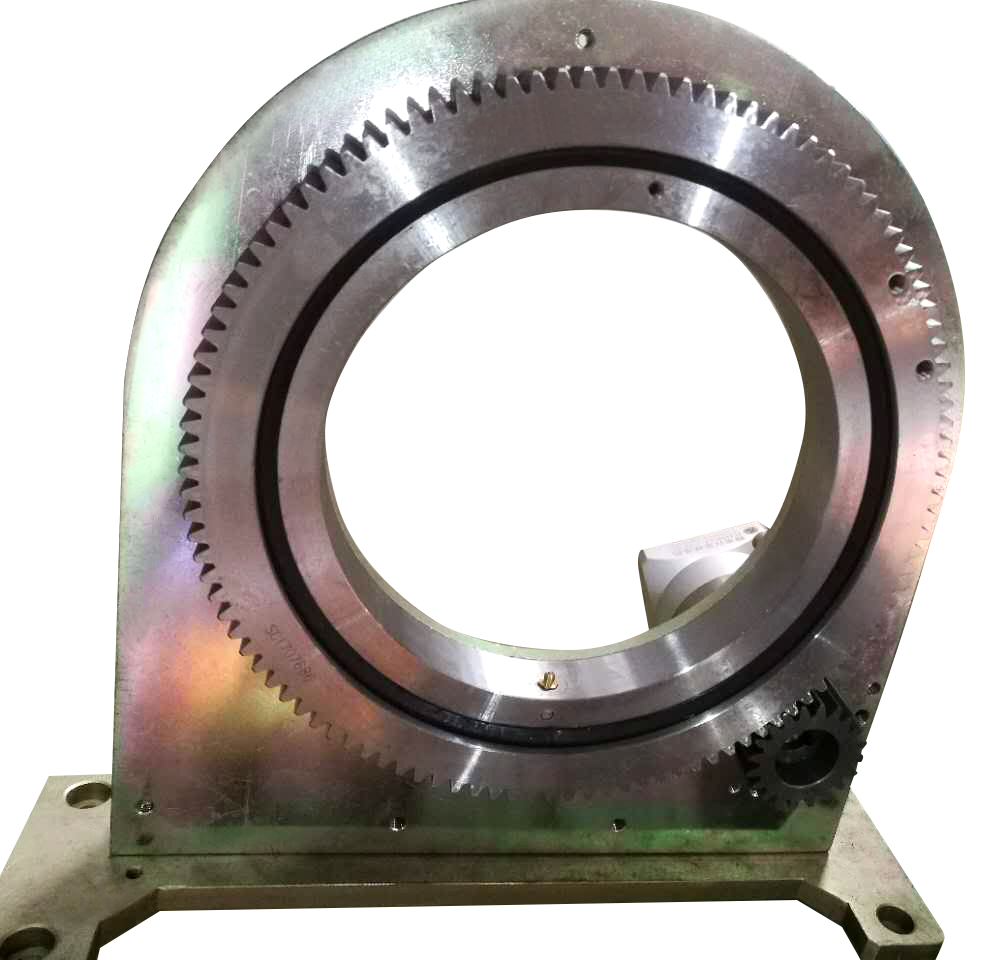 The rotating mechanism of the film winding device adopts rotary bearing. Flexible overall structure, fast winding speed, tight bundling and the film is not easy to break,integral shield which is safe and reliable.

Bundling and bagging are completed in one station at the same time, simple and fast

（from left to right）

The film is pulled to winding machine by bagging film head in advance.The pipes are bundled and conveyed to a pre-opened film bag. When the winding is finished, the stacker ascends at the same station and the packed pipes can be sent to the material cart,then the film bagging is finished at the same time.The winding, bagging and stacking are all completed at the same workstation without additional working procedure. The space saved is just enough to place a material cart, the structure is greatly reduced, and the operation is reliable.

Material pushing, stacking and film bagging adopts servo which is fast and stable 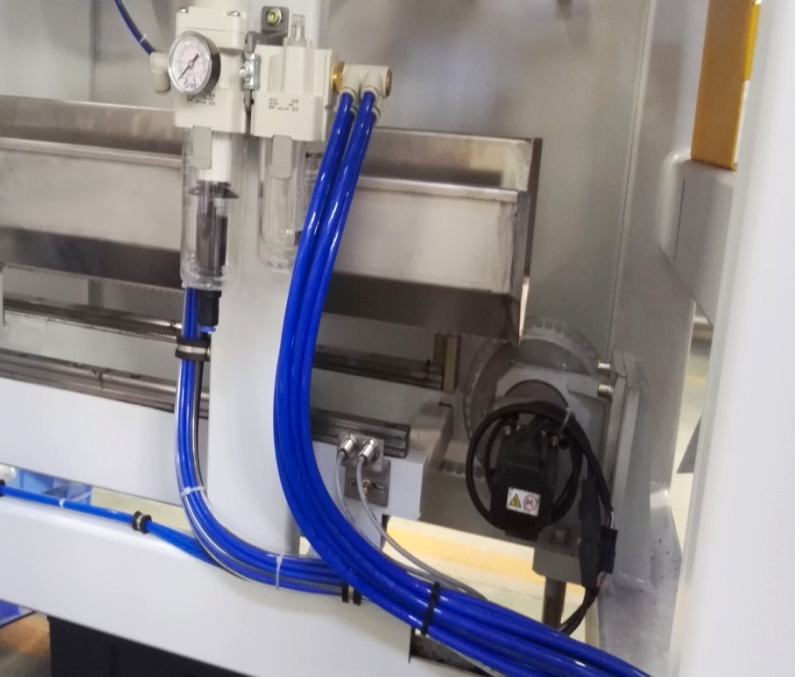 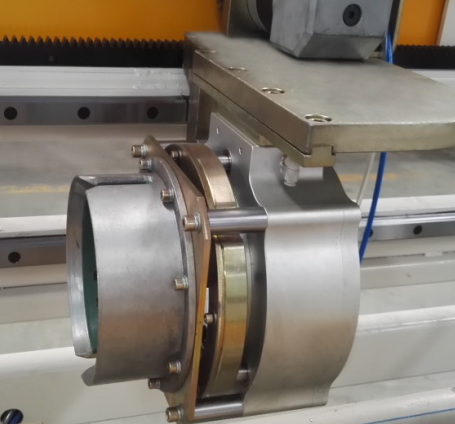 Weighing device (in the discharging trough), detect the set bundling weight, it will prompt and alarm when beyond the preset value, to avoid the problems due to the number of pipes . 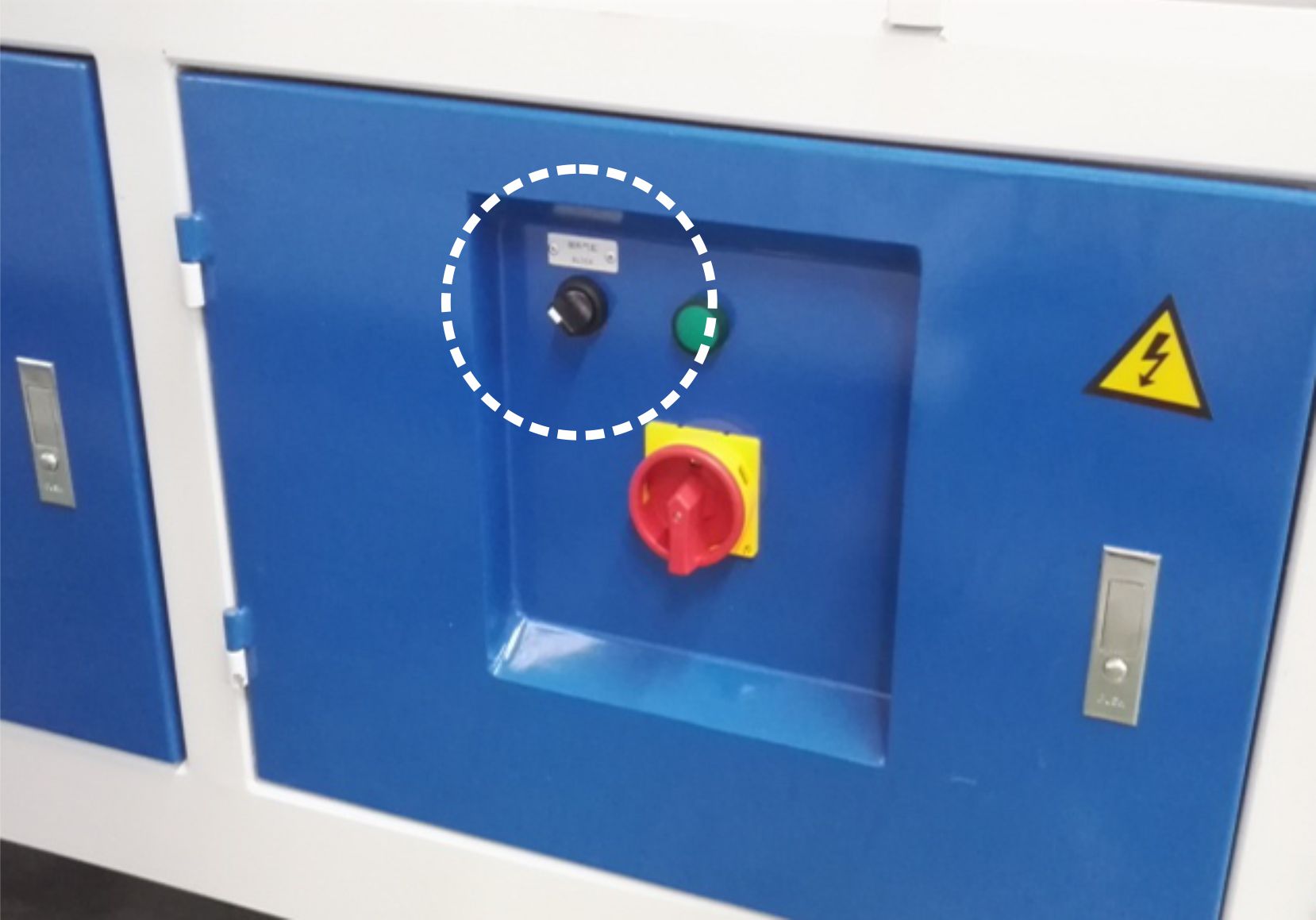 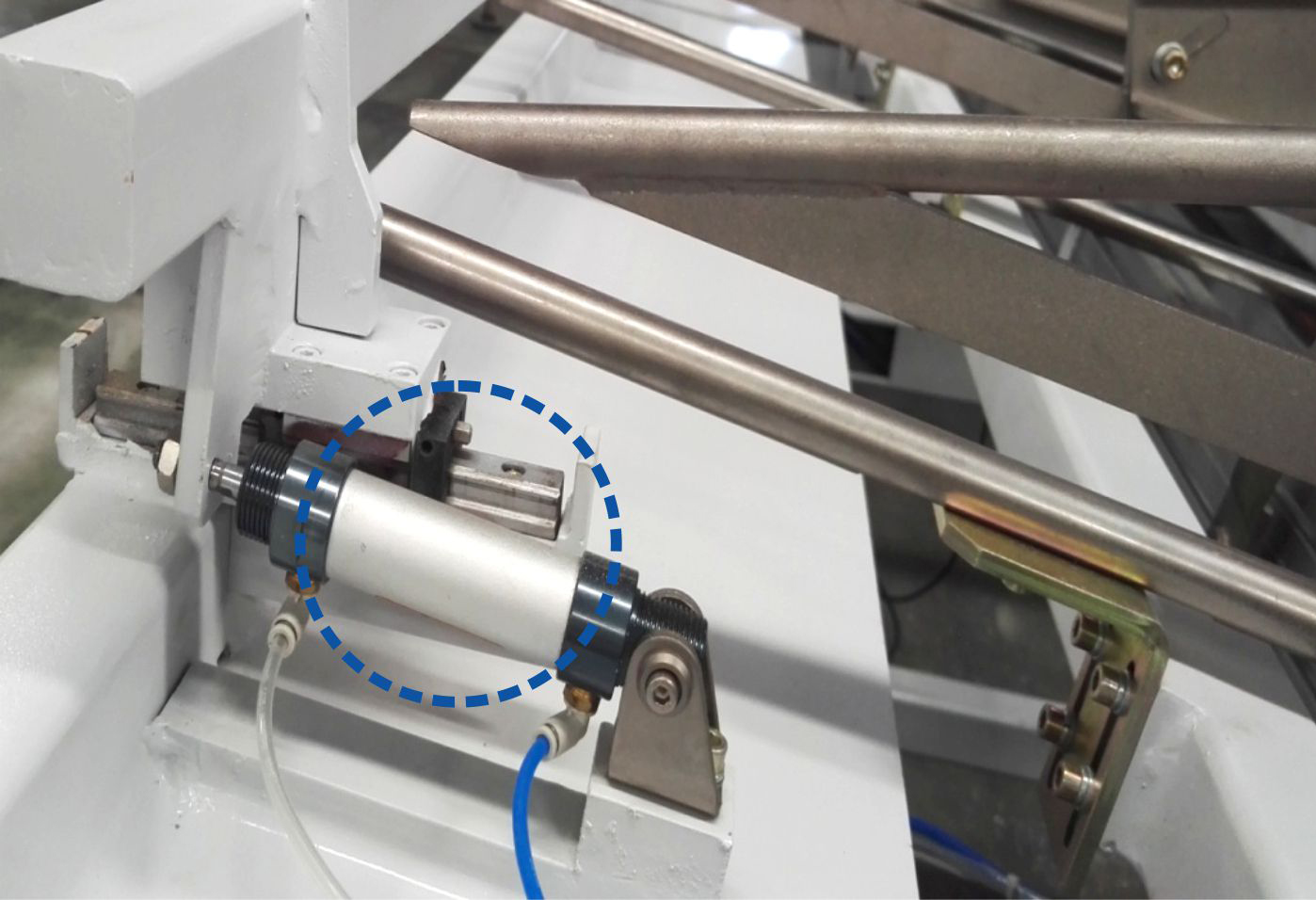 Linear guide rail push-pull and cylinder reset mechanism is adopted. When the storage pipe is needed, the pipe can be quickly blocked on the storage material by rotating the button and pushing the material rod by the cylinder. The pipe can be automatically bundled and bagged into the arrangement area of the lower layer until the quality detection is OK. Automatically finish the folding of bags at the ends during the process of pipe stacking and lifting,before going into the stacking station it winds both of the ends.While winding in the upper part of the packing machine, the packing and bagging processes can be carried out synchronously without affecting each other to improve work efficiency. 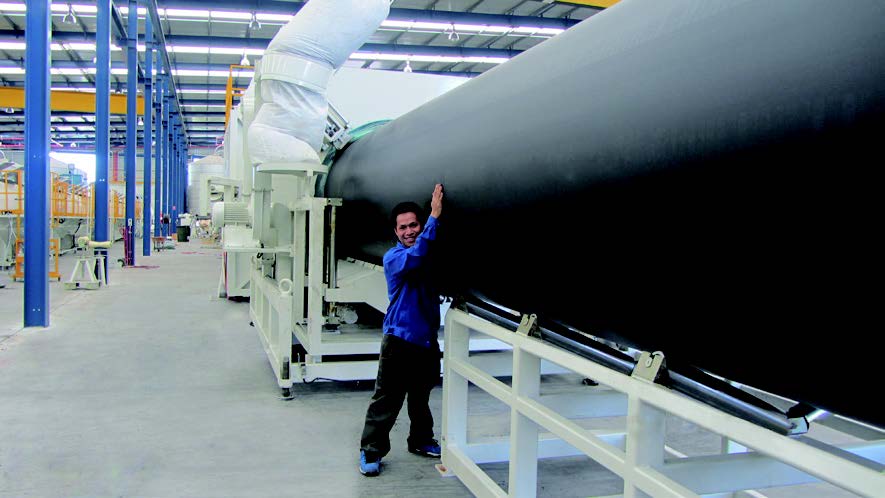 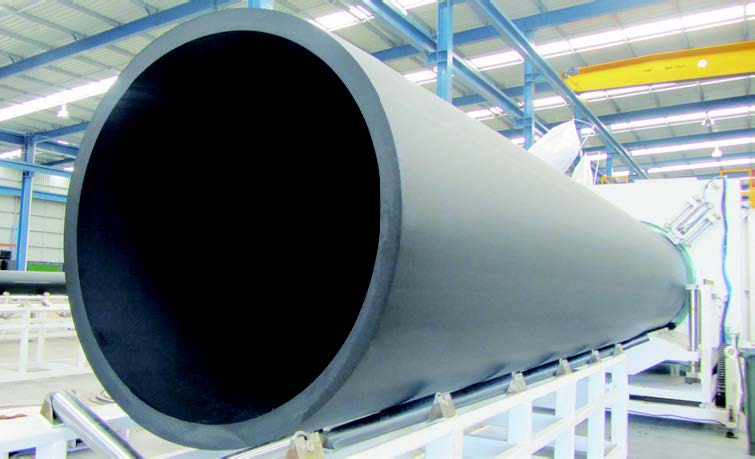 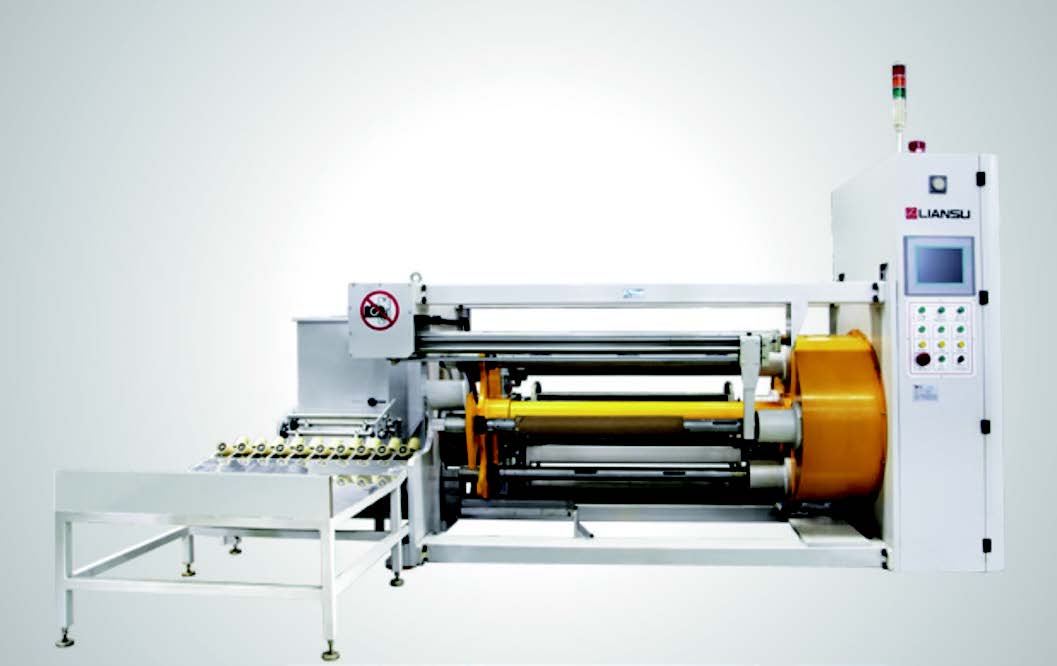 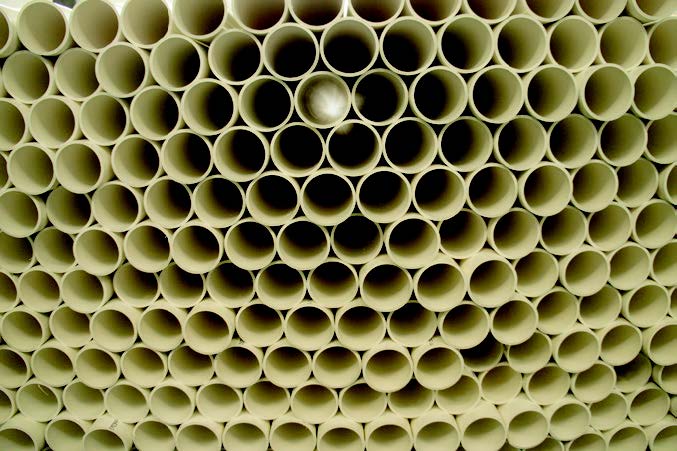 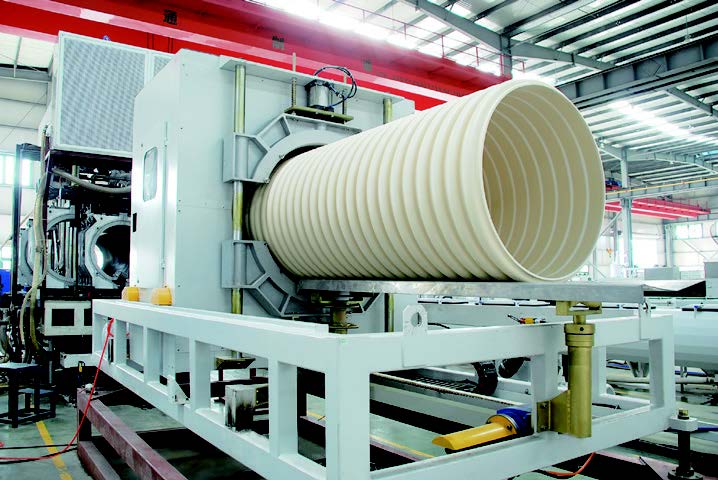 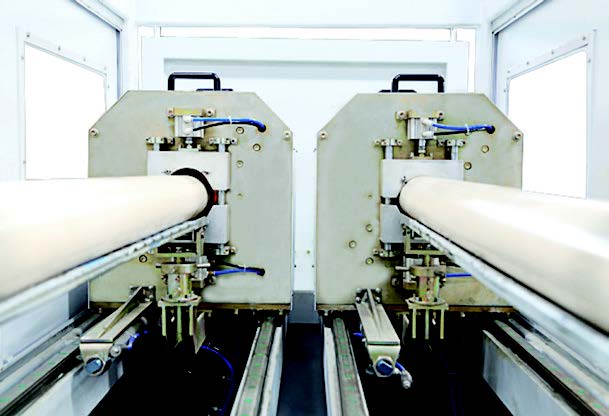 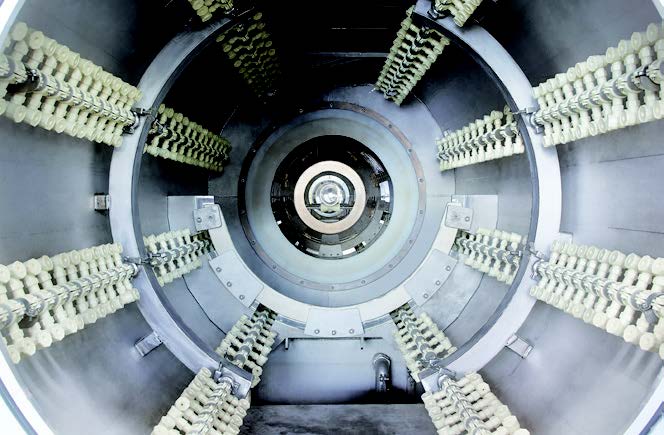 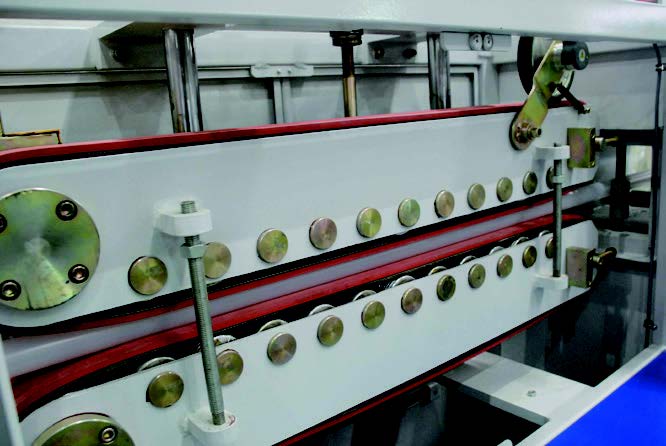 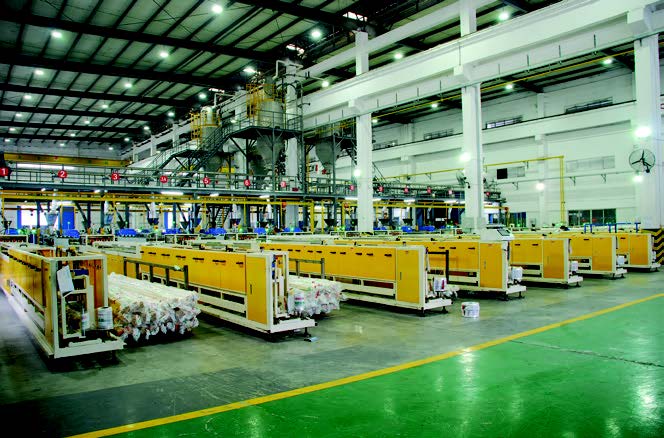 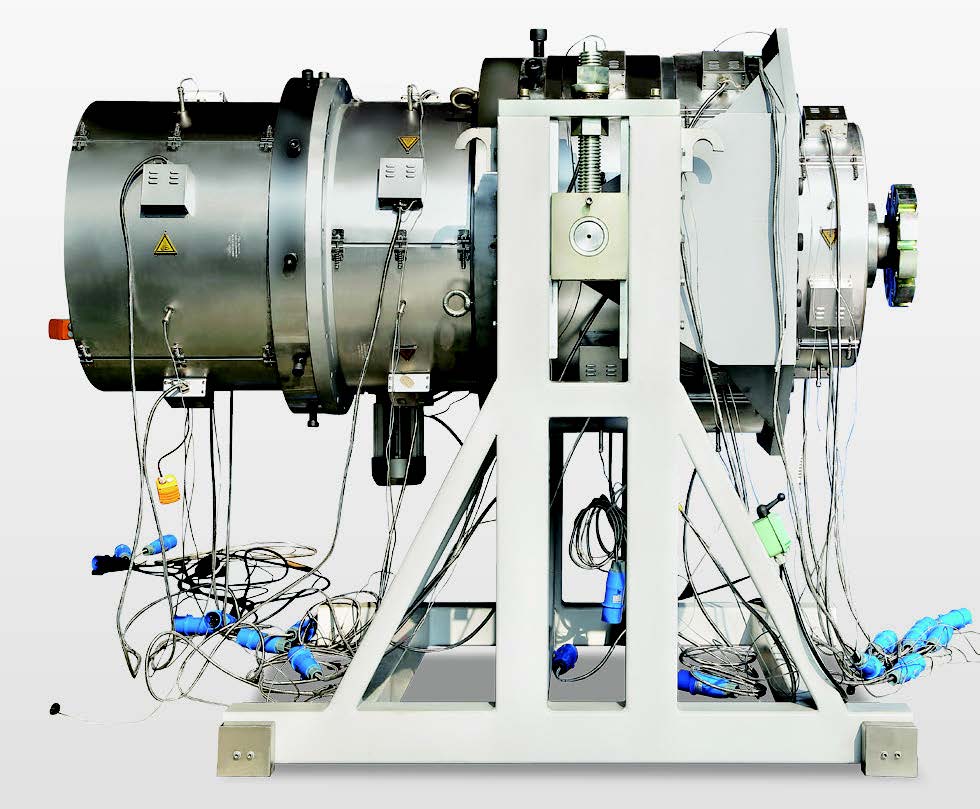 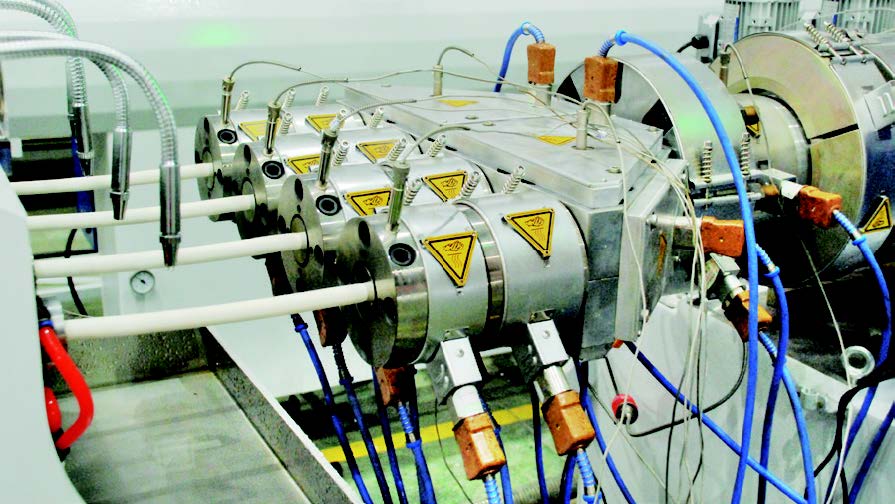